The NSC reviewed the Draft Environmental Impact Report (DEIR) on the proposed development plan for the Head-Royce School South Campus expansion. The project has significant negative impacts on surrounding neighborhoods, the environment, safety, and public infrastructure. The DEIR is wholly inadequate in addressing the significance of these impacts. Below you’ll find the analysis of experts commissioned by the NSC to respond to the DEIR in areas of major impact on Oaklanders and the surrounding neighborhood.

The proposed project includes an enrollment increase of 37 percent, adding 344 more students to create an enrollment of 1,250 students along with additional employees, staff, and faculty. The current enrollment of about 900 is already overwhelming the public infrastructure surrounding the school and is constantly causing nuisance problems for the residents. The DEIR dramatically understates the importance of the impact of increasing the total number of people on campus.

The proposed development plan does nothing to correct the current problem of HRS having no realistic emergency evacuation plan. The development dramatically increases density and poses risk to the lives of students and residents above and around the school's properties. 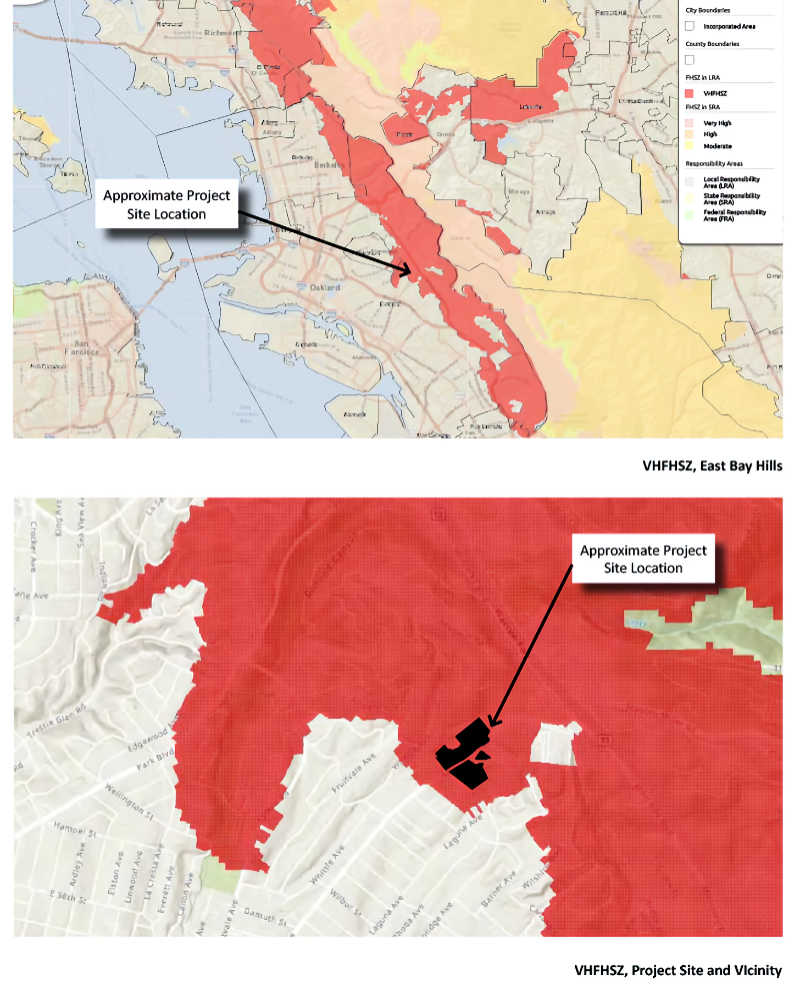 The misuse of data and vagueness of the DEIR calls into serious question its validity and credibility regarding transportation and traffic impacts. These impacts not only affect neighbors, but HRS students and families, as well as the thousands of Oaklanders who daily use Lincoln Avenue and Highway 13. The majority of student drop-offs and pick-ups are from vehicles traveling from Hwy 13, then downhill on Lincoln Avenue. The broader community will be subject to increased traffic congestion on Lincoln Avenue and safety issues regarding emergency vehicle access.

It’s the combined effect on traffic and safety from these interrelated road changes, along with higher enrollment and public events, that increase the significant impacts of the project on the greater community. 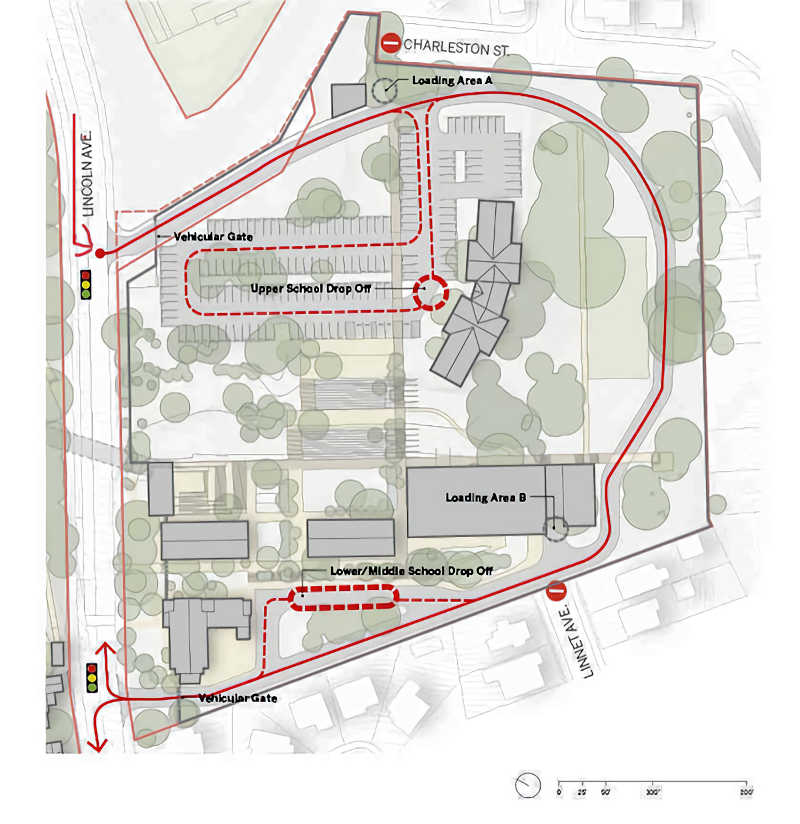 As seen in this diagram, the red line represents the proposed internal perimeter road on the South Campus. Lincoln Avenue would be re-engineered with an additional stoplight, a left turn lane and a left and right turn onto Lincoln Avenue from an exit point. Cars and trucks would maneuver downhill within feet of homes for several hours a day to drop off students and make deliveries to two loading docks. 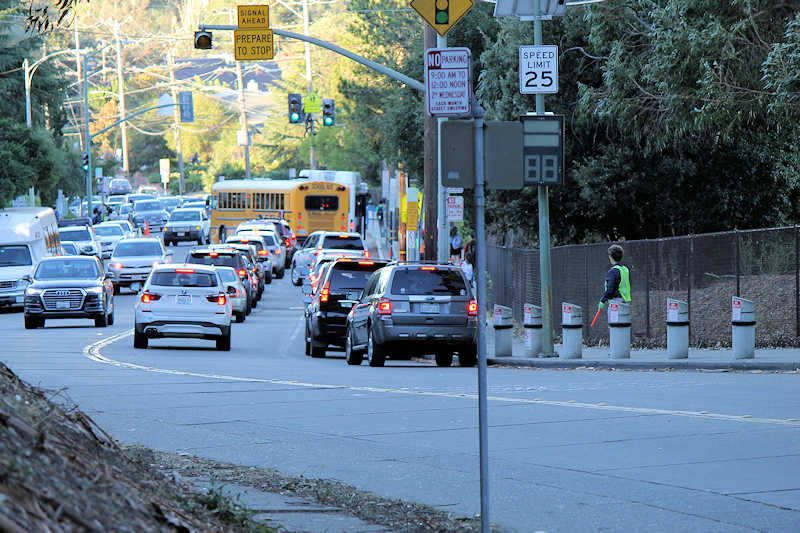 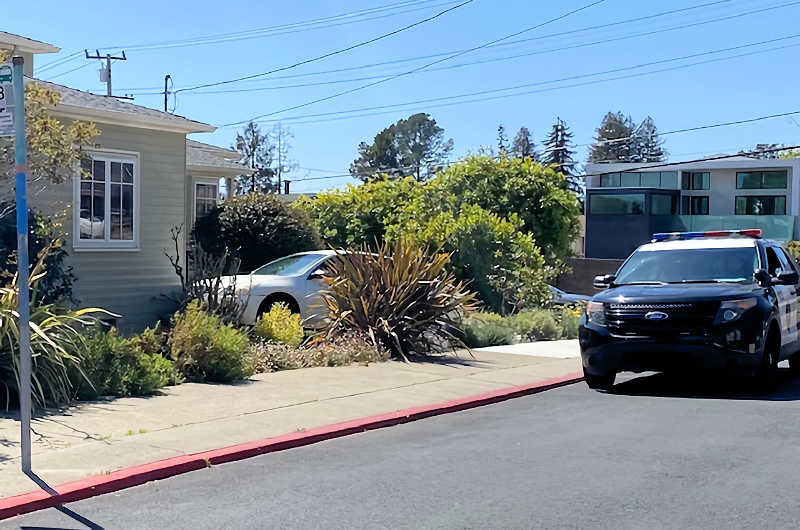 Impatient drivers idling behind a car waiting to turn left onto Alida Street resulted in an accident involving a car running into a house on Lincoln Avenue.

If the HRS development project is approved by the City Council, on its North and South campuses, Head-Royce School will have four theaters, two amphitheaters, two food service areas, multiple rooms for performing arts, and several pavilion/outdoor areas for entertainment guests to mingle.
The proposed performing arts center is a 15,900-square foot building with 450 seats. This large building is situated just feet from homes.
The school plans to rent entertainment facilities for public use.
The South Campus is not an appropriate location for an entertainment venue and will cause multiple safety and nuisance problems.

The development of the South Campus will cause the loss of hundreds of mature, beautiful, healthy trees and with them, their bird and wildlife habitat.

Already located in this urban residential neighborhood are the Mormon Temple, Ability Now, The Greek Orthodox Cathedral, Head-Royce School, Sequoia Elementary School, Brett Hart Middle School, the KSS Immersion Preschool, and more than 250 homes many with ADUs surrounding the South Campus on three sides.  It is a dense area. The school is located in a Very High Fire Hazard Severity Zone and about half a mile from the Hayward Earthquake Fault. 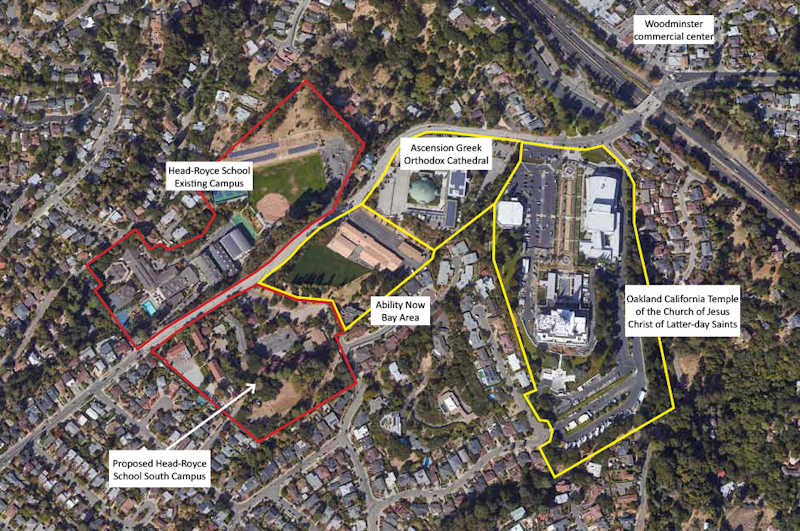 Head-Royce purchased a number of residential properties in the neighborhood. In January 2018, at the request of HRS, the City of Oakland granted a permit for HRS to lease an empty field on Lincoln Avenue for school sports activities. That field abuts residential backyards. The NSC and the neighbors most impacted objected to the school's requested use of the field 12 hours a day on weekdays and additional time on weekends with no provision for a sound wall. While the City approved a permit allowing HRS to use the field, the City imposed a shorter time period for use of the field and imposed conditions on its use.